As an improvisor, actor and one of Perth's most outstanding female comedians, Andrea is currently the host of 'Weekends with Andrea Gibbs' on ABC digital radio across Australia, co-creator of Barefaced Stories & a comedian at The Big HOO-HAA!

Her standup career began in 2005 when she won the Western Australian finals of Triple J’s Raw Comedy. In 2006, she was selected to perform in ‘The Comedy Zone’, Melbourne International Comedy Festival’s best new acts line-up. In 2007 she was poached by 96fm and joined the breakfast crew.

She returned to the Melbourne International Comedy Festival in 2008 with her first solo show ‘Starkers’, which also toured to Adelaide Fringe festival.

She continues to work in radio on RTRfm and is a regular guest on ‘Burning Down The House’, a show made solely by women.

She began improvising in 2002, with The Big HOO HAA!, has played in the Australian National Theatresports Championships and in 2008 travelled to Canada where she trained with Keith Johnstone and performed with The Loose Moose Theatre Company.

As an actor Andrea has performed with Perth Theatre Company, REAL TV, Black Swan State Theatre Company and Barking Gecko. Her film/TV credits include Very Small Business (ABCTV), The Stepmonster (Nickelodeon) and My Year Without Sex (2009).

"One of the most exciting, funny, unique and talented comic performers I've had the good fortune to stumble upon" Tim Minchin

"Gibbs is quite simply suburb" The Guardian Express

"Andrea has an amazing ability to create fascinating and insightful characters and weave them into intriguing story lines.... a rare talent indeed" Sam Longley, Artistic Director - The Big HOO HAA! 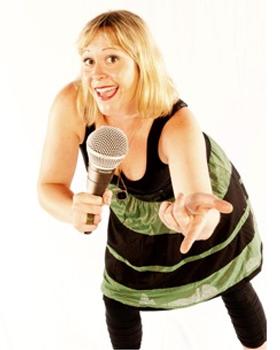