Ashwin started his comedy career as a writer, producing comedy cartoon, Boymongoose, that went on to attract over 10 million views online and was featured on TV and radio internationally.

Having been born in India, but dragged through a childhood covering New Zealand, Malaysia, England and Australia, his comedy touches on cultural issues with an often absurd take. His style is slightly dry with elements of physical comedy.

He was a Raw Comedy state finalist following a year of stand up gigs and has performed in country pubs, inner city bars, office parties and political events, adapting to a wide range of audiences. He also recently had spots performing alongside Steady Eddy, Jimeoin and Matt Okine.

With his cultural background and with the help of some language for dummies books, he’s planning on touring more through Asia and Europe in the future. 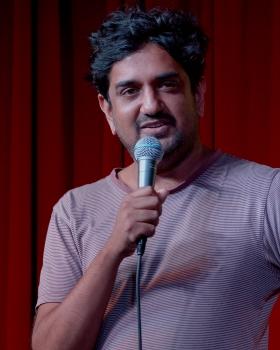