Described by UK comedy publication, Chortle as “a natural on stage”, his laid back and confident demeanour combined with seamless crowd work and an instinctive smooth improvisation style has gained him a reputation as one of the most exciting and hilarious performers coming up on the circuit today.

He’s supported comedy legends such as Wil Anderson, Tom Green (Can), Ari Shaffir (US), Tony Hinchcliffe (US), Akmal, and has been hand picked to perform for over two thousand people at Splendour in the Grass for multiple years running.

He can currently be seen being funny in Comedy Central’s popular “Share This” web series, which he writes and stars in alongside fellow comic Becky Lucas. They again teamed up when they were together selected to co-write, co-create and co-star in “Be Your Own Boss” as part of the Fresh Blood series on ABC. His face has also appeared on the ABC’s hit show

“Utopia”, and you can hear him on his chart topping podcasts “Mike Check” and “Total Reboot”. He’s also funny in conversations with peoples’ mothers at parties.

Named one of the “Funniest Aussie Comedians To Follow On Social Media” by the Herald Sun, Cameron James is known for being a charming troublemaker with a reputation for being able to neatly deliver the art of observational and confessional material in both an intelligent and amusing approach.

Accolades include an acclaimed 1 hour comedy special airing on ABC’s “Comedy Next Gen”, he was National Runner-Up in Triple J’s 2012 Raw Comedy and alongside credits on ABC sketch show “How Not to Behave” currently serves as head comedy writer on SBS’ “The Feed”. Cameron has also made multiple appearances on Triple J and has experienced sold out runs at Perth Fringe World, Adelaide Fringe, Sydney Fringe, Sydney Comedy Festival, Bondi Feast and the Melbourne International Comedy Festival with his solo shows.

Cameron James is clearly a new comedy talent with a big future. He thinks you should listen to music loud, never litter and be good to your mother.

“The most obvious Next Big Thing” – Time Out Sydney

“Very smart and very funny. If they keep making them this good, I’m going to have to work much harder” – Greg Fleet 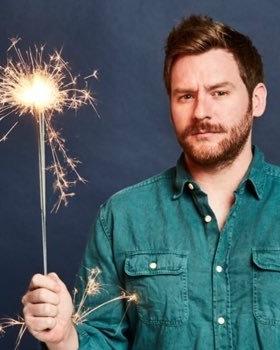