Chris Martin is an accomplished stand-up comedian and improviser. At the age of 5, he told his family* a joke and no one laughed… well 30 years later he’s MUCH BETTER!

His ability to find himself in an awkward situation is second to none, and has been the basis of his side-splitting storytelling comedy since day one. He’s also quick with a joke and worldly observation.

Chris’ relaxed stage presence and on-point delivery has seen him perform in the best comedy clubs in Australia, all while supporting some of the biggest names in the industry including Damien Power, Luke Heggie and Sam Campbell.

His debut stand-up show Claw Machine (2018) explored all the important relationships from his life and was met with sell-out crowds and rave reviews.

No matter your mood, Chris’ comedy will always leave you smiling and wanting more.

Chris is also a co-founder and director of the Brisbane based and award-winning Big Fork Theatre.
Recently, Chris has been working on his passion project Stand Up VS Improviser, a comedy game show that brings together his two loves stand-up comedy and improv (it’s going to be HUGE!). 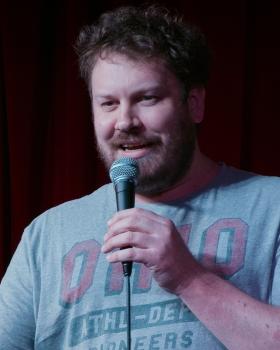