Unstimulated with a job driving trucks in the mining industry and a former life as an apprentice chef, Craig Quartermaine opted for a career change in his late twenties. Applying for and winning a broadcasting scholarship with ABC Radio set the proud Nyoongar man on a new path, from where he was selected to contribute to the second season of Australia’s first Indigenous sketch comedy show, ABC TV’s hugely popular Black Comedy. From here Craig went on to become the Western Australian correspondent for the National Indigenous Television network, NITV.

While his media career was burgeoning, Craig was quietly hitting the open mic rooms of Perth, developing a passion for stand-up comedy that quickly led to him making the national finals in Australia’s most prestigious comedy competition – triple j’s RAW Comedy at the Melbourne International Comedy Festival. Shortly after this milestone achievement Craig headed off to play London’s West End before making his triumphant Edinburgh Fringe Festival debut with the spectacularly-received Race Off, where he introduced the Australian race dynamic to the world. This set him on his way to a huge European tour and catching the eye of comedy heavyweights such as Hannibal Buress, Chris D’Elia, Nazeem Hussain and Jim Jefferies, all of whom have chosen Craig to open for them in packed out theatres and arenas across the country.

On his return from the UK, Craig relocated to Sydney where he was employed by ABC TV to write for and appear on the successful first season of their new ‘tonight show’ style program Tonightly. In 2018 he performed on triple j‘s first ever ‘One Night Stand-up’ at their One Night Stand concert for 20,000 people in St Helen’s, Tasmania. The clip of his spot, posted by ABC Comedy went viral, amassing over a million views in 48 hours and ultimately around 10 million views from around the world, with everyone from Danish housewives to American ranchers becoming instant fans. Craig currently broadcasts for ABC radio and has hosted both national and local shows across the network.

His take on race, politics or Australian nuances is not always comfortable, but Quartermaine takes pride in making you laugh when you really think you shouldn’t. Unique, with a biting perspective about life as an Indigenous Australian, Quartermaine’s dark wit sneaks up on you right before it smashes you in the face.

The accomplished journalist and TV writer is affectionately described by UK comedy bible The List as a ‘charming ball of rage’… don’t let the smile fool you and don’t let the laughs scare you.

Quartermaine’s is the most perfectly delivered punchline you’re likely to see at the Fringe. The Wee Review (UK)

A once in a lifetime show that if you miss, you may never forgive yourself… Quartermaine destroys the crowd with incisive material that can’t be disputed...  Australia Times 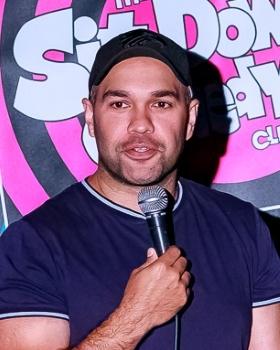