The one-way people recognise comedian Dave Callan is because of his beard and long hair. Many people want him to shave but it is his trademark. He thinks it will be very fashionable when the new Ice Age comes.

Dave Callan is easily the hairiest comedian in Australia. He’s a versatile and highly entertaining comedian, writer and performer, who is commonly mistaken for Chewbacca, Jesus and The Wild Man from Borneo.

Born in Ireland, Dave moved to WA when he was 8. Apart from performing stand-up comedy in Perth, he did a series of ads in WA for WA Home Loans and Fruitisma. He didn't move to Melbourne until Rove McManus asked him to help him out with his new TV show.

Most non-Melbournites only know Callan through the two seasons he spent on Rove. At the end of its second season, Dave decided to concentrate on his “first love”, live performance.

Callan returned to live work in 2000 with a show which proved to be a sell-out success. In 2001, he returned to the world famous festival with a vengeance: in addition to his own comedy festival show, Dave Callan is Hairy, he was a part of Jesus Christ, Movie Star with two other comics.

The segment on Rove for which he is best remembered is “Words That Sound Better When Said By Dave”. Cloaked in his thick Irish accent, Dave was able to make words such as the following extremely funny: portfolio, plectrum, haberdashery and trousers to name a few.

His other TV credits include O'Loghlin on Saturday Night, the ABC’s Standing Up and The Melbourne International Festival Comedy Gala and the SBS documentary – King of the Road. Dave has also appeared on Spicks and Specks, The Footy Show, and Hey Hey It’s Saturday. 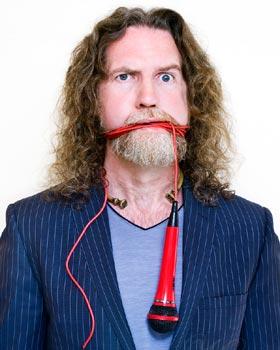