As a writer, comedian, singer, television and radio presenter; Em Rusciano is one of the most well-rounded and talented performers in Australia.

In 2011 Em thought she would try her hand at cabaret so she wrote, produced, directed and starred in The Saintly Bitch Sings. It was received so well she decided to put a show into the 2012 Melbourne Cabaret Festival. Em Rusciano – The Musical! sold out before the run started and she received a prestigious Green Room Award nomination for her efforts.

The 2013 Melbourne International Comedy Festival was calling so Em wrote another one-woman show called Puberty Rhythm and Blues. The show was a smash; she sold out her season, added extra shows and received rave reviews including four and a half stars from The Herald Sun and five stars from Theatre People.

Em then went on to tour her shows The Motherload and most recently Em Rusciano is NOT a diva to sell-out crowds across the country, including selling out the Palais theatre in Melbourne and the Enmore theatre in Sydney. She also received more five star, rave reviews.

Network Ten’s The Project noticed Em’s special something and hired her as a presenter in 2010. She has been with The Project since its first week on air and has presented many stories including “Behind the Scenes of Master Chef in New York”. Em regularly presents the “Metro Whip” segment as Melbourne’s correspondent. Em occasionally co-hosts Studio 10, has appeared on Channel 9’s Mornings many times and guest hosted The Circle.

Em’s first book Try Hard will hit the shelves in late October 2016. Pre-sales alone have already put her on the top of the iBook autobiography charts! Em also had a national weekly column for News.com.au; and won Pedestrian TV’s 2014 Blogger of the Year award.

Em hosted Perth’s 92.9 breakfast radio show for four years where she interviewed Prime Ministers, traded baby stories with suburban mums and jammed with the Black Eyed Peas. She riffed on everything from US politics to post-natal depression to Lady Gaga’s man-bits, and drove the network to ratings supremacy, year after year. Em currently has a national Sunday night radio show: The Em Rusciano Radio Show on the SCA Hit network her podcast deeply shallow regularly tops the iTunes charts.

Em has been engaged by some huge brands to spearhead their online campaigns, Kitkat had her write and star in a series of short videos that were viewed over a million times. Em recently has 2 huge campaigns with Weetbix and Optus. She has been the face and voice for various advertising campaigns for Nissan, Bref, Recoverlyte, Kan Tong, Australian Scholarships Group, Tontine and Terry White Chemists. 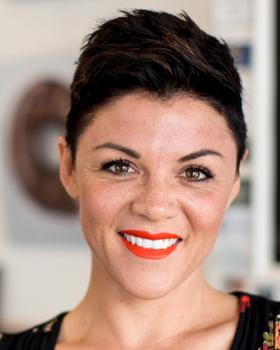