Emma Holland is a comedian, collage artist and photographer who takes herself very seriously. After graduating from the Australian National University’s School of Art in 2016, Emma quickly became a regular on the Australian comedy scene, achieving Runner-Up in the 2018 RAW Comedy National Final. 2019 proved a breakout year for Emma, she performed her debut solo show Dolly Doctor Strangelove to sell-out crowds and critical acclaim at the Canberra Comedy Festival. Following it up as part of the prestigious hand-picked Comedy Zone at the Melbourne International Comedy Festival.

2020 saw Emma receive a residency from the Museum of Brisbane, during which she explored comedy through the lens of collage. Her photography work can be seen amongst the seas of posters at comedy festivals but is more easily digestible on her website.

Emma is renowned for her absurd dead-pan cadence, quick-witted writing, and highly visual on-stage performances. She has been asked on multiple occasions to not wear a beret on stage (but did anyway, as is the artist’s way). 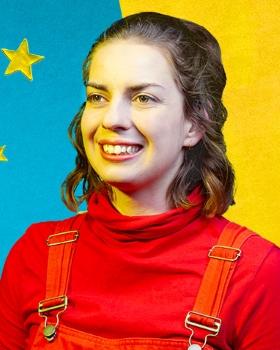