After a 30 year career (in an industry not known for its longevity!) this middle aged (born 1964) maestro of mirth and merriment has just about seen and done it all.  From topic-specific sportsman’s luncheons’ to (poorly paid!) comedy clubs; from the tasteful tone of black tie society to the rough and tumble of troops on active duty, Fred has spoken and the crowds have laughed.

Compliments and kudos have been many over his extensive career, here are some of his favourites:

“Your performance was the perfect way to end the speeches of what has been a successful evening.” – Former Australian Prime Minister Kevin Rudd after 10 Year Celebration dinner with Wayne Swan and Bernie Ripoll

“I don’t care how many times I watched you I always end up laughing myself stupid!” – Dual rugby International Michael O’Conner

"The highlight of this tour has been watching you weave a magic that lets those soldiers forget where they are. And you do it night after night.” – Rock Legend ‘Angry Anderson’ at the end of a tour of Iraq and Afghanistan for The Australian Defence Force (one of five such tours he has done).

“Forged in the furnace of current affairs and sharpened nightly against the steel of public opinion, Fred’s irreverence is razor sharp.  Before your very eyes, Fred masterfully sews into the complacent and contented cloth of public life a thread of colour bright enough to light the way to the nearest psychiatric ward!” – Barrister and dear friend Robin Slade Jones when asked to describe after many viewing what he thought of Fred’s comedic bent.

Having led what he views an interesting life, Fred draws his material from those ‘every’ experiences, whether it’s his interest in immigration (both his parents escaped from Eastern Europe after WW11), or his belief that youth gets it way too easy nowadays.  (He has no children, automatically making him an authority!).

Fred’s comedy is, and always will be, pertinent, insightful, clever and funny.  Storyteller, Comedian, Raconteur or Master of Ceremonies, as a unique performer, Fred will ensure a successful and entertaining evening. 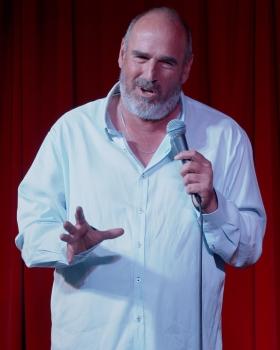