Sardonic, unique, and downright weird – Gen Fricker has quickly become one of the nations brightest stars on the national comedy circuit, with her unique blend of sassy stand up and dark musical experimentation, delivered with a butter-wouldn’t-melt-in-her-mouth smile.

Since making her comedy debut in 2011, as a national finalist in the Triple J Raw Comedy competition, Fricker has sold out seasons of solo shows at the Melbourne, Perth and Sydney Comedy Festivals, Supported US comic Reggie Watts on his last Australian tour as well as appearing at the Just For Laughs Comedy Festival, Fall Festival and Splendour in The Grass to name just a few.

In addition to stand up, Gen is heard every week day by listeners of the popular national radio station Triple J after recently taking over as the stations lunch presenter and a regular ‘friend’ of the breakfast team. Prior to this, Gen co-hosted Triple J’s weekend arvo’s. Her TV and media credits are also stacking up with recent appearances on Have You Been Paying Attention where upon her debut she basically killed it – in fact, they loved her so much over there that she’s since been invited back a couple of times! You may also have caught her on Dirty Laundry Live, Legally Brown, as a columnist for the Sydney Morning Herald, a writer/performer on ABC2’s The Roast [Season 2] and Triple J’s Chatback with Tom Ballard.

“One to watch” Vogue Australia 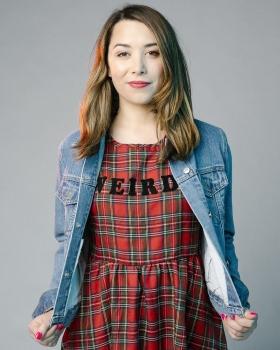