Described as "gobsmackingly excellent" and "completely in your face funny" by publications across the galaxy, Jackie has maintained her reputation as one of today's most hilarious and gifted stand-up comedians while simultaneously distinguishing herself as a versatile actor, vocalist, musician, voice over talent and writer. Jackie was the recipient of the prestigious MO Award for ‘Achievement of Excellence’ in Live Comedy.
With regular appearances on 20 to 1, The Today Show Weekend Edition, Good News Week, Spicks and Specks and ShowTime’s - The Playlist, Jackie can also boast her own successful webisode and appearances on the multi media comedy platform Comedytime based in the USA.
Jackie Loeb’s one-woman show Jackie Loeb Sings The Worst Songs Ever Written played to rave reviews and sold out at the Sydney Comedy Festival. The show was nominated for the Best Comedy Award at the Hollywood Fringe Festival. This accolade has opened the door to many more performances in the USA, including appearances at the Hollywood Improv, The Laugh Factory, The Comedy Store, The Icehouse in Pasadena and The Comedy Palace in San Diego.
Jackie was one of only 15 international comedians to progress to the comedy showcase round on NBC’s Last Comic Standing filmed in Miami and is one of the select few Australian acts to appear on the UK comedy series The World Stands Up for Paramount TV.
Jackie has enthralled audiences with her highly original brand of comedy at leading venues across Australia and internationally. Jackie has appeared in comedy festivals across Australia and around the world including numerous appearances at the Melbourne International Comedy Festival, The Sydney Comedy Festival, The TV1 New Zealand International Comedy Festival, The Edinburgh Fringe Festival and The Vodafone International Comedy Festival in South Africa where she was labelled the pick of the crop. Jackie has also performed several times on the London comedy circuit and at comedy clubs in Malaysia, Singapore and New York.
Along with playing Australia’s leading comedy venues, Jackie Loeb was a cast member and writer on the award winning Australian television series on the award winning sketch comedy television series Full Frontal and has appeared in all three series of the Comedy Channel’s Stand Up Australia.
Jackie was invited to perform in Just for The Pitching, a section of the Montreal Just For Laughs Comedy Festival where five participants get to pitch their idea for a television series to the executive producers of all the major networks. As only the second Australian ever to be given this opportunity, this was a great accolade.
Jackie was selected by The Friends of NIDA to appear in an Australian comedy showcase in New York City, along with fellow Australian comedians Adam Hills, James Smith and Wil Anderson at the highly revered New York venue, ‘Joes Pub’.
Jackie is a regular on both the local and international Comedy Festival circuit.
"Definitely the pick of the crop was Jackie Loeb from Australia. Fearless with a psychotically sharp tongue, she is also blessed with a marvellous singing voice and it would be a crime not to see her again in this country in her own show."  The Cape Times (South Africa)
"Jackie Loeb's routine, accompanying herself on electric guitar, is delightfully wacky. She goes anywhere and everywhere, her inventive comic mind purring like a well-tuned engine."  The Melbourne Age
"There is no denying, Jackie Loeb is one very funny lady." Adelaide Advertiser
"Loeb is, literally, a laugh a minute, but pointedly so. If visual art, literature and music can serve as powerful and influential political, social and cultural commentary so can comedy. But only if it's this well-conceived." Australian Stage 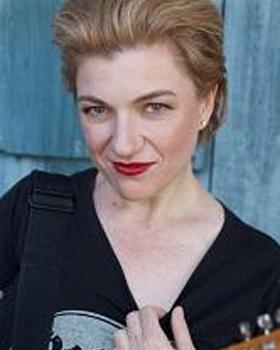