All the way from Auckland, New Zealand, we introduce Jarred Fell.

An adult’s Comedian Magician who has been making a name for himself worldwide with his extreme approach to Comedy and Magic.

Jarred has performed and Headlined around the world, including:

And this is to name just a few…

In March 2019, Jarred received a classy 5 STAR Review by The Advertiser at the Adelaide Fringe Festival, causing sell-out shows over the 2-week season.

Jarred makes regular appearances on film and television, and is highly sought after for consultation on magic, effects, misdirection, and sleight of hand from both the local and international film industry.

“Jarred is one of my favourite acts to work with. Wish I could take him on tour with me everywhere” Steve O (Jackass)

Jarred has won many awards in both the Comedy and Magic industries, and gained notoriety from nominations that include: 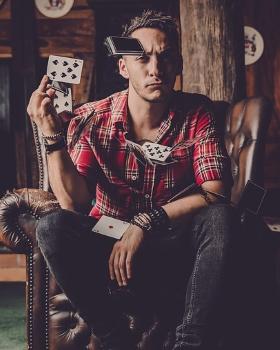