RAW Comedy 2019 & 2020 state finalist, Jayde has performed alongside some of the biggest names in Australian comedy, and she's almost certain those bookings were neither clerical errors, nor mean pranks. She steals beer from the green rooms though just in case.

Jayde has performed internationally, but that was mostly because someone let her backstage and she refused to leave. She hasn't shut up about it since.

In her spare time, Jayde enjoys talking shit about things she doesn't understand, as evidenced by her podcast 'Feedback Error' (co-hosted by Jemma Bayley), and her guest appearances on ABC radio, where she regularly hits the airwaves for reasons that remain unclear.

She's also a huge magic enthusiast which isn't really relevant, but if you know any card tricks, she'd love to see them.

See the woman applauded by critics as 'Who?', and the comic once described by a heckler as 'You're better than this, love’. 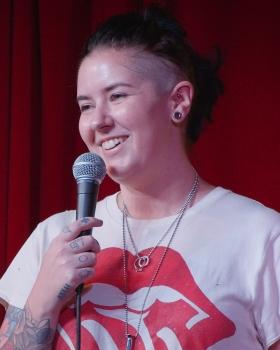