A world‐class headliner who doesn’t pull any punches, making audiences roar with laughter at the kind of material many comedians would never pull off, Australian born US‐based Jim Jefferies has the goods that enable him to charm and challenge a crowd in equal measures.
Jim’s breakthrough was in 2005 at the world‐renowned Montreal Just For Laughs Festival, when his storming performance in The Nasty Show made audiences, critics and fellow comics take note: it was followed by rave reviews and planted Jim firmly in the “must‐see” section of the world comedy map. Of course, Jim’s return to that festival and every festival since was completely sold out.
Jim has now achieved seven monster comedy specials, his own acclaimed sitcom (written, directed by and starring Jim), sold out arenas around the world and is one of the planet’s biggest ticket‐selling stand‐up comedians.
“A consummate professional, totally at ease on stage as he prowls around dropping deadpan obscenities into a sea of laughter. He is clever too.” The Guardian
“Sick and repellent.” Christian Voice (UK) 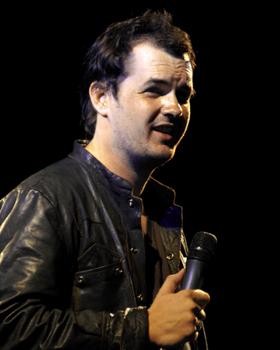