Khaled Khalafalla is an award-winning young comedian who, despite being a relative newcomer on the Australian comedy circuit, has already created huge industry buzz.

Khaled won best of the Melbourne International Comedy Festival in 2013, was National winner of the Green Faces comedy competition in 2012, National runner-up of RAW in 2011, and has been dubbed the next "huge mainstream star" by The Age.

Having lived in 11 cities across three countries, the young Australian Egyptian's fresh, intelligent social commentary is a welcome addition to the comedy scene. Audiences obviously agree as he sold out his Melbourne and Sydney Fringe Festival debut seasons.

Khaled's at times abrasive style of comedy has already seen him perform alongside the likes of Arj Barker and Fiona O'Loughlin in venues across the country - from Melbourne's Town Hall to Sydney's Allphones Arena.

Khaled was a presenter for ABC3's Studio 3, and established Australia's first non-alcoholic comedy room, Shisha Comedy, in both Melbourne and Sydney. Khaled's stand-up comedy special was filmed for SBS's television series, Stand Up at Bella Union.

Khaled has performed at all the major venues and comedy festivals around Australia and given his debut performance at the New York Comedy Festival. He has performed top-selling runs across the major Australian comedy festivals, headed off to the Middle East with five international comedians as a part of the televised United Nations Of Comedy tour, been hand-picked by the acclaimed Just For Laughs to perform on their Stand Up Series showcase (filmed for the Comedy Channel at the Sydney Opera House) and entertained our troops in the Middle East.

"If there’s one act from this year who is going to go on to become a huge mainstream star, it’s Khalafalla" The Age 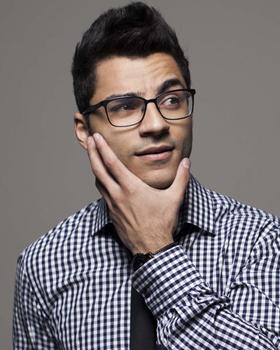