Throughout history there have been many famous comedy duos… Hale & Pace, Howard & Costello, The Three Stooges… but the guys from The Laundromats are different… They’re not famous. In fact they don’t even want to be famous! They just want to make people laugh… and own mansions and sports cars. Oh, and meet girls.

Shane & Kristian, AKA The Laundromats, started getting laughs from the moment they first walked on to the stage together in 2001. And thankfully this continued until 2005 when the lads started performing Stand Up Comedy.

Since then, these two rock n roll drop-outs haven’t looked back… which explains all the dints on their Tarago’s back door. If you’ve seen The Laundromats performing their quirky style of musical comedy on TV shows like Rove, The Letterman Show, Neighbours & The Biggest Loser - Couples, well you should probably stop reading this and book yourself into rehab right now. Shane & Kristian made a pact that they would never, ever bow down to corporate pressure and be on mainstream TV. That is, unless there was a large amount of money involved… or at least a free T-shirt or something.

The Laundromats earned themselves 3rd place at the QLD State Final of JJJ Raw Comedy Competition in 2006 and then in 2007 they were awarded "Best Musical Comedy Act" in the Queensland Inaugural Comedy Awards... but they still haven’t received their trophy.

After only being involved in the Comedy Industry for just a short while, the following accolades have already been bestowed on our two unlikely comic heroes… 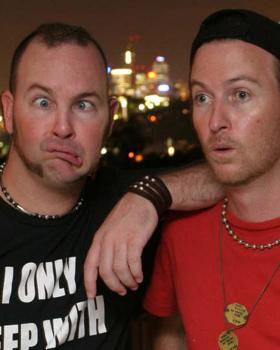