Hailing from the windy capital of New Zealand, Li'i Alaimoana is a stand-up comedian who's a star in the making, and touring Australia for the first time with his Critically acclaimed 2019 New Zealanmd International Comedy Show, "SeriousLi'i?"

The New Zealand born Samoan takes lessons learned in his very short career and puts them into practice during this hilarious hour of non-stop laughs.

The 2017 Billy T Award Nominee brushes through his life with a fine tooth comb and his acoustic guitar, where truths about being a son, being a husband, being a father - heck, even being in the kitchen of the first house party he ever attended as a teenager, all come to light in a show where critics have questioned why he isn't on television, and why his wife gets to look after his kids while he's touring Australia.

“Alaimoana is candid but not too direct, crude, but just enough to keep him off the blacklist, mean spirited, but fun... Why isn’t this guy on T.V? - NZ Entertainment Podcast

“I loved it. SeriousLi’i!” - Art Murmurs

“He’s one to watch!” - Theatreview.org.nz 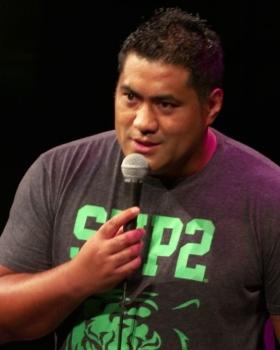