Perennial globetrotter Marcus Ryan is a gifted storyteller with a natural comic bent and has featured at so many festivals and clubs around the world it’s hard to know where home is these days. One thing's for sure, he’s right at home on stage. A laid back yet engaging presence, Marcus charms his audiences with a sharp wit and tales from the road, having performed in over 40 countries in 6 continents - even gigs in Spanish!
Though Australian born, Marcus is not one to stay still. Often based in Canada & the UK and a regular on club circuits across North America and Europe as well as frequenting festivals world-wide. It is the solo work however where he thrives. Never shy of a challenge, continually carving his own path, bringing English speaking comedy to communities, cities & even countries that have never had it before! Completing epic journeys through South East Asia & Latin America and becoming the first person in history to perform English speaking stand-up comedy in Laos, Cambodia, Nicaragua, Uruguay & Paraguay.
HISTORY: At age 18 Marcus worked on-air in breakfast radio before kicking off his stand-up career in Melbourne. Early success in Australian festivals gained invitations to perform in Edinburgh & Vancouver, allowing the opportunity to combine his passion of comedy with a newfound love of travel. When it comes to experience, there isn’t a lot he hasn’t encountered. From television, film, radio and acting, as well as writing and performing poetry, mentoring students and upcoming comics through workshops. Whether it be charities, club comedy, backpacker gigs to corporate events, from 3 minute sets to 3 hours, he’s performed in a play for an audience of 1 to hosting music festivals up to 15,000! Versatile is an understatement. Be it clean or blue, for young & old, for family, kids and international audiences. Marcus Ryan is an excellent reliable all-round MC and headliner. A brilliant storyteller and observational comic with an ability to read any room. Don't miss your chance to catch him while you can!
Marcus Ryan is an award-nominated stand-up comedian, an award-winning storyteller (The Moth), a published writer and explorer, he’s hitchhiked his way through Latin America, walked 1,000km across Spain and has a story to tell for every occasion. Regarded as one of the most well-travelled performers working today. Whilst not a household name in one country, he has a global following. His debut one man show, the critically acclaimed 'Love Me Tinder' has sold-out festivals and tours and after an epic journey of Latin America he returned to Oz with a new show '¿Hablas Inglés?', shortlisted for Best Comedy 2017 at Fringe World Perth. Both shows are currently simultaneously on tour in Europe 2017.
‘You won’t be disappointed’ – The West Australian
‘Effortlessly funny...unpretentious, informal, belly-laughs-a-minute stand-up’ ThreeWeeks, UK
‘Marcus Ryan had one of the best lines of the night, brilliantly subverting an established comedic segue…’ ‘He does everything a stand-up’s supposed to do’ Chortle, UK
‘With skill and deft timing, he hit the mark with fine observations on his global travels’ The Skinny, UK 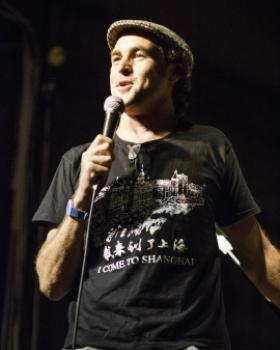