You may remember Ro Campbell from his role as Darryl the nasty bully who beat up a deaf boy and stole his hearing aid in 1988 Emmy award winning film Captain Johnno, but its highly unlikely.

Following a brief spurt of child acting breaks in the 80’s Ro forgot all of his lines in a high school play and vowed never to set foot onstage ever again .

After dropping out of a law degree he spent much of his 20’s traveling Australia and the world doing a litany of dead-end jobs including kitchen hand, fisherman, sheep shearer, Golf Sale sign holder and roadie.

In 2004 he found work rigging venues at the Edinburgh fringe and for the first time found himself immersed in the world of stand up comedy. Something clicked and he decided that after a 12 year hiatus it was time to get back onstage, but this time as himself.

Since then the UK based Aussie has wowed audiences in over 40 countries with his relentlessly entertaining brand of cheeky slightly dark humour.

He has performed at the last 12 Edinburgh Fringe festival’s and has made The Scotsman’s pick of Best Jokes of The Fringe. In 2010 he was  crowned Scottish Comedian Of The Year (slighty controversial being Australian and all).

Ro supported Live At The Apollo Star Tom Stade on his 2011, 2013, 2015 and 2017 UK Theatre tours and highly acclaimed Edinburgh Award winner Russell Kane on a number of his 2010/2011 tour dates. He recently opened for Kevin Bridges in Australia and has regularly appeared at Kevin Bridges and Friends live at The Stand Comedy Club in Glasgow.

Campbell is the hidden gem of the Fringe … mixes all of his worldy experiences together into one hour of pure hilarity’ **** RipItUp.com.au, Adelaide Fringe

“His laugh-per-minute ratio is one of the highest I have seen this festival… and he makes it look effortless! Because Ro Campbell is really bloody funny” -  NZ Theatrereview, NZ Comedy Fest

“Great Stand Up and exceptional storyteller” The Skinny, Edinburgh 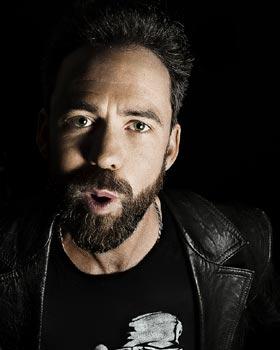