Sam is one of the most daring and unconventional comics in Australia, completely original and vastly absurd, he has one foot firmly planted into the soils of reality, and the other rooted deep into the psyche of being silly.
Sam is a multi award winning cult figure within the Australian comedy scene.  He has collected awards, glowing reviews, and played to sell out houses around the world.
His 2006 solo show, Tales of the Erotic Cat picked up a prestigious nomination for the Barry Award for Most Outstanding Show in the Melbourne International Comedy Festival, 2008’s Where Can I Win A Bear Around Here? won the much respected Festival Director's Choice Award, and in 2010 Sam picked up the Piece Of Wood Award for his solo show, Fail, as well as the Golden Gibbo Award for The Incident which he performed with fellow comedian, David Quirk.
2011 saw Sam take home the award for Best Comedy Show at the Adelaide Fringe Festival, not to mention scoring a nomination for a Barry Award for his solo show, The Precise History of Things and a nomination for Edinburgh’s top Fosters Comedy Award (the comedy equivalent of an Oscar) for Meanwhile.
Continuing to perform his stand up shows to sell out houses at comedy festivals around Australia, Sam has also performed his solo shows four times at the Edinburgh Fringe Festival, twice at the prestigious invitation only Montreal Just For Laughs Comedy Festival as well as JFL festivals in Chicago, Toronto and at the Sydney Opera House.
“★★★★★” The Age
Joyous on the radiowaves, Sam has made Australian youth radio network Triple J his own.  2008/09 saw him at the helm of the Weekend Breakfast Show as well as weekday Breakfast and Drive Shows and he is still now a regular contributor across the station.
In 2012 Sam assembled a wonderful cast of Australia's pre-eminent absurdists for Problems (ABC1)a four part journey through the cream brick neverland that is the Australian suburbs.  In 2013, Problems was broadcast and received with applause throughout the UK on UKTV’s Dave. 2013 also saw Sam make his US television debut on comedy powerhouse Conan on TBS.
Sam is now conquering the globe spending his time hovering between Australia, London and Los Angeles introducing his comedy to the world.
Alongside his comedy, Sam has worked within animal enrichment at the Melbourne Zoo with elephants, seals, reptiles and small native mammals.
“a breathlessly inventive psycho-comedy ★★★★★” Independent,  UK
“★★★★★ Sam Simmons’ show is a comedy masterpiece” The Scotsman
“★★★★★ Welcome to the most absurdly crazy world orbiting the Fringe, featuring some of the most original comic concepts and laugh out loud moments of any Edinburgh show in the past 20 years” The Herald, UKer 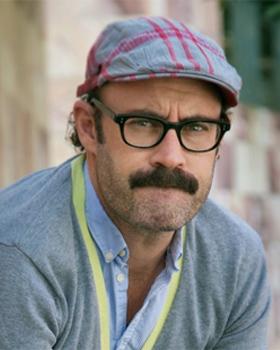