Winner: Spirit of the Fringe, Jakarta International Fringe Festival, 2012
Winner: Barry Award, Melbourne Comedy Festival, 2010 (with Randy)
Winner: The Age Critics Award, 2008
Winner: Best Newcomer, Melbourne International Comedy Festival, 2006
Nominee: Barry Award, Melbourne International Comedy Festival, 2008
Sammy J is an award-winning comedian, writer, and songbird. From Melbourne to Edinburgh, he has earned a reputation as one of the most exciting and inventive performers on the international comedy scene.
As a solo act, Sammy J has performed at the Edinburgh Fringe Festival, Montreal Just For Laughs, and throughout Australia as part of the Melbourne International Comedy Festival (MICF) Roadshow and Gala. He has also appeared in millions of living rooms courtesy of Spicks and Specks, Talkin' 'Bout Your Generation, and Good News Week. His live albums are occasionally listened to and someone has almost certainly purchased a copy of his DVD, 58 Kilograms of Pure Entertainment (Madman Entertainment).
In 2008, a collaboration with puppeteer Heath McIvor led to the dark musical comedy Sammy J in the Forest of Dreams. The show won the Age Critics' Award in Melbourne, and went on to receive five-star reviews in Edinburgh and London's West End. As "Sammy J & Randy", the duo then created Ricketts Lane, a live sitcom which took out Australia's most prestigious comedy prize - the Barry Award for Most Outstanding Show at the 2010 MICF. From there they played the Sydney Opera House; headlined a Montreal Gala; sold out in Edinburgh; and gained a national following on the TV sketch show Good News World (Network Ten). The pair are currently developing Ricketts Lane for TV.
When he's not prancing about on stage, Sammy J regularly co-hosts The Conversation Hour with Jon Faine on ABC radio, and writes for The Age newspaper. He is also currently an Ambassador for Big Brothers Big Sisters.
In July 2013 he debuted as host for the new ABC1 sketch comedy show Wednesday Night Fever.
But despite all this, Sammy J's greatest project remains unfinished. At the 2008 Melbourne Fringe Festival, he created the ridiculously ambitious 50 Year Show, a comedy spectacular that will continue every five years and finish in 2058. The second 50 Year Show takes place in October this year.
"One truly spectacular hour of comedy” - Chortle, UK
“An endlessly creative talent.”  - Time Out London, UK
“Sammy J is witty, talented, and possessed of incredible timing and memory.”  - The Age 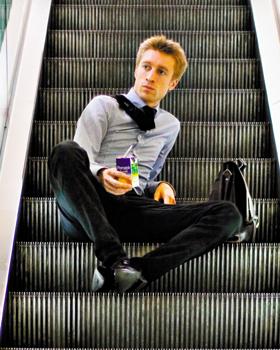