Sarah Levett is comedy’s love child. Sarah grew up in a household surrounded by the heavyweights of the Australian comedy business, her mother running The Comedy Agency and managing Australian comedy superstars through the ‘80s and ‘90s. From age eight, Sarah’s second home has been comedy venues, television studios and radio stations. So it’s not surprising that comedy became Sarah’s vocation, having learned from an early age to hold her own in “bantering with the boys” (the boys in this case being household names).

In her younger years Sarah studied acting, singing and dancing, but it was attending NIDA to formally study comedy that brought her ack to her roots. After her incredible experience at NIDA, Sarah took her craft to the stage and has since performed many hundreds of shows in Australia and L.A’s premier comedy venues.

Sarah then coupled her stage career with a radio career, joining the Nova 969 team for several years - where she could draw on her improvisation, writing and performance skills, both on-air and as MC for Nova events. Her many highlights at Nova 969 include guest co-hosting The Rabbit Show, MC-ing for numerous record label artists, and being invited to appear as a guest on the breakfast show and the national drive show. Sarah has also featured in Radiowise’s “Homegrown Humour” series.

In 2008 Sarah decided to develop the radio side of her craft further, and moved to Geelong to gain invaluable experience as Personality/Co-Host of her own radio breakfast show, K-Rock Geelong’s "The Sarah and Matt Show". In January 2010 she was lured to New FM Newcastle where she is the Personality/Host of “The Sarah & Steve St John Breakfast Show”.

Amongst Sarah’s unique traits as a comic working in breakfast radio is her courage to go beyond where a typical comedian would go - she never just “hides behind the funny”, and is instead willing to bare her soul and her personal life on-air to make a deeper personal connection with callers and listeners.

Alongside her radio work, Sarah has continued her dedication to her craft as a standup comic, regularly performing at venues in Los Angeles, Sydney and Melbourne. In October Sarah will tour as a star of “The Wild Women of Comedy” shows which are rapidly selling out. 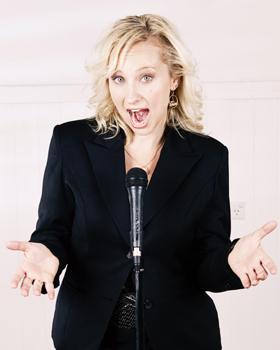