The Scaredies are John Fleming and Rusty Berther – exceptional musicians, singers, composers and comedians. Their clever and witty parodies and versatile style make them one of Australia’s most sought after acts.

Formed in Melbourne in 1990 the SWLG's burst on to the live comedy scene in a frenzy of harmony, hilarity and broken guitar strings. John and Rusty spent two years in Australia’s' top a Capella group "The Phones”, then decided to turn their song writing and vocal talents to inane songs.

Since 1991 the Guys have been touring in North America, where they have done more than 22 trips including University and college campuses, folk and comedy festivals and Comedy Club tours of the US and Canada.

They were voted Best Comedy Act on U.S. Campuses in 1994 and 1995 (NACA), and Best Variety Act on Canadian Campuses 1995 and 1996 (COCA) and have been given countless awards by individual colleges for being most popular campus act.

In Australia, the SWLG's have performed in many Festival programs, corporate and private functions, public seasons, comedy clubs, children’s festivals and public humiliations. They have appeared on every major television show in the last ten years including Hey Hey it's Saturday, The Midday Show, Tonight live with Steve Vizard, The Big Gig, Good Morning Australia, In Melbourne Tonight, The Footy Show, The Today Show, Denise, Today Tonight, A Current Affair, AM Adelaide and the Sale of the Century Gift Shop (a highlight).

The guys have been regulars at the Adelaide Fringe Festival and The Melbourne International Comedy Festival where their consistently sold out shows are testament to them being one of Australia’s most talented, exciting and sought after acts.

In August 1997 the Scaredies ventured to the UK for the first time performing sold out shows at the Assembly Rooms as part of the Edinburgh Fringe Festival. They repeated their success in 1998 and 2001, performing in the internationally acclaimed Famous Speigeltent.

At the Melbourne International Comedy Festival in 1998, the Guys did a new show entitled "Score" which featured an 80 piece symphony orchestra and a 230 voice choir in a spectacular no holds barred performance. They have since toured this show around Victoria and performed with the Adelaide, Tasmanian, and New Zealand Symphony Orchestras, horrifying classical music lovers wherever they go. With shows in seven different countries the Scaredies have racked up over three thousand performances.

They are experienced multi-media performers as well as being consummate instrumentalists, singers and composers.

The Scared Weird Little Guys...mindless stupidity for the thinking person.

The guys are regular guests on all major television and radio variety shows. 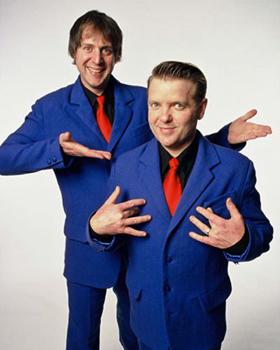