Best known for their hit song, The Hawk, about the imagined love story of supermodel Jennifer Hawkins and scientist Stephen Hawkings,  Smart Casual is Roger David (on guitar) and Fletcher Jones (on beard), arguably Australia's smartest, most casual musical comedy duo.
In 2009, Smart Casual featured in the Melbourne International Comedy Festival's hand-picked selection of hot new talent, 'The Comedy Zone', before going on to tour nationally and internationally on the Festival Roadshow. By international, they mean Singapore.
In 2010 the boys toured their new show Same Mother, Different Fathers – their life story to date – two half brothers living together as a musical comedy duo. Directed by good friend and comedian Heath Franklin, the show sold out at the Adelaide Fringe, Sydney and Melbourne Comedy Festivals.
In 2011, the Smarties debuted their musical story, The Story of Captain Entree, which toured to Adelaide, Sydney and Melbourne, and saw them become the face of a McDonald's campaign.
So in 2012, after selling out for cash and C grade celebrity status  in ther aforementioned McDonalds, they redeemed themselves with the festival show, Broken Dreams.
Regular headliners across the country, their witty ditties and beautiful harmonised low-fi com-rock classics have seen Smart Casual become one of the most in demand comedy acts in Australia
Whether its headlining the Homebake Music festival or rocking the Sydney Comedy Store, they have 'wowed' audiences across the country. They also ‘wowed’ each other, by agreeing to turn ‘wow’ into a verb for this website blurb
Encores performed on request.
‘Immediately likeable. Aussie laconic humour is alive and well.’ - The Age
‘Exceptionally clever and well executed... destined for big things.’ - Buzzcuts
"Smart Casual are one of the festival’s hidden gems" - The Pun 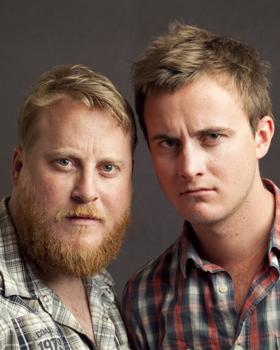