Apart from his radio and television career, Steve is also a highly respected stand up comedian. He has performed and regularly performs in all major comedy venues across Australia and overseas including feature shows at the Melbourne Comedy Festival.

In March 2011 Steve was invited to Los Angeles to perform at an all Australian show at Flappers Comedy Club. Whilst in LA Steve performed number of other gigs which were all well received resulting in an invitation to return.
He has performed sell out shows at The National Theatre and The Comedy Club as well as a fourteen-week season at The Mercury Lounge at Melbourne's Crown Casino and the Comedy Room at Sydney Casino.
Steve has also hosted functions for the JNF and UIA, as well as many Jewish community functions and for three years was the Master of Ceremonies for the annual Make-A-Wish Foundation Ball at Crown.
In terms of corporate event performance, Steve is a specialist, he reads the crowd expertly and always leaves them laughing, his skill to MC an event and stick to a tight running schedule is 1st class as a result of his years of radio broadcasting.
If you requires material to be specifically written for your event Steve is able to provide this service as.
He is the consummate professional and most importantly very funny.
Steve has also performed stand-up on all Australian television networks on shows as diverse as Midday, Live & Kicking and Hey Hey It’s Saturday.
In November 1992 Steve released a 45,000 word humorous Australian social history book titled Suburban Icons: A Celebration Of The Everyday. It was published by ABC books and received critical success and sold out as well as becoming part of the Australian History syllabus at several universities.
In December 1997 Steve co-produced and released the comedy album through Miushroom Records titled The Squirrel Grippers - Nine Inch Males. The album was a compilation of the Triple M morning show that he and Tim Smith hosted in 1997; it also included some of their live material. The album was a great success and was nominated for the best comedy album at the 1998 ARIA awards.
In October 2007 Steve had his second book published, this time by Melbourne University Publishing. It is an unauthorised biography on the life of Steve Vizard. Titled Vizard Uncut the 600 page book took over a year of exhaustive researching, interviewing and writing to complete.
In August 2009 Rockpool Publishing release Steve’s third book, Holden V Ford; The Cars, Culture, The Competion with pre-shipment orders of more than 10,000 copies. Holden Vs. Ford made the best seller list in October 2009 and stayed there for one month.
Steve currently has several television and radio programs in development with some of Australia’s leading production companies. 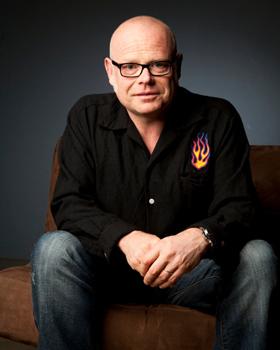