Watching Steve Philp perform is like watching an episode of 80’s TV show “ It’s A Knockout” except he assures us no-one will get hurt!! Actor, Comedian and Former Radio Announcer Steve has adapted to most things his parole officer has given him.
Starting out on an acting career Steve starred in kid’s stage show’s such as “ Barney the Dinosaur” and “ Blinky Bill” as well as working with The Wiggles on “ The Dorothy the Dinosaur show” and quickly found kids to be on his level of intelligence.
Steve then moved into Stand-Up Comedy and made the finals of Competitions such as Triple J Raw and Green Faces and then quickly moved on the road touring the country for the last 8 years with Comedians such as Carl Barron, The Umbilical Brothers, Adam Hills and a number of international acts such as Arj Barker and Tom Green. This immense touring enabled Steve to work in sold out venue’s such as The Sydney Opera House and The Enmore theatre. During this time Steve moved into radio co-writing and co-hosting an ACRA award nominated Saturday morning Breakfast show “ Kennedy and Philp” on Nova 969 (Sydney) for 5 years which allowed Steve to interview and work with stars such as Jack Black, Ron Moss, as well as filling in for Merrick And Rosso on weekday breakfast for 5 weeks over the Christmas period. Steve also became active as an MC and has hosted the afternoon session of Tropfest for the past 5 years.
More recently Steve has been revving up and humouring TV studio audiences as the warm up guy for TV Show’s such as CH 10’s Ready Steady Cook, CH 7’s Battle of The Choirs , CH 10’s hit “So you think you can Dance” and Ch 9’s NRL Footy Show. But Steve’s big break came in 2008 when he was selected as one of 14 Australian comedians to travel to Miami and compete in NBC’s top rating show “Last comic Standing” in which he made the Quarter finals and got to perform to a sold out Miami improv and an American TV audience of well over 2 million. This has led to Steve appearing on Australian TV this year with a comedy spot on Ch 9’s NRL Footy show which has led to him becoming a semi regular appearing on numerous Footy show sketches.
Steve also appeared on SBS’s new Sports quiz show The Squiz as a panelist and more recently appeared on The Best of The Footy Show Comedians DVD Vol 2. Steve also has been seen in several TV commercials of late including a national Pizza hut campaign and Castrol.
The Sun Herald describes Steve as “ a natural” and seems like not too long before he’s got someone warming up his own TV show audience. 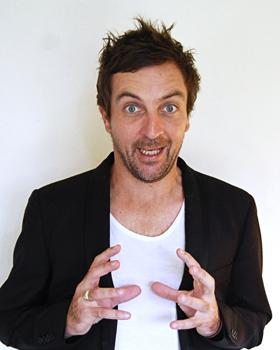