Tahir is one of Australia's busiest comedians. He has been a feature in all comedy venue's around the country and had numerous television appearances.

Tahir was named Comedian of the Year and has even been Logie nominated. He has worked for the who's who of the industry and has been booked for countless private and corporate functions. He is a regular at major Comedy Festivals, on panel shows, television debates and even Celebrity Theatre Sports.

Tahir has been involved in some of the most successful stage and screen productions. Recently in 2004 he appeared in the fourth series of PIZZA on SBS as the much loved and hilarious character 'Habib'. He was also an integral member of the team in the hit movie 'Fat Pizza'.

In 2003 'Lord of the Kebabs' was a runaway success and eventually played to over 20,000 people in over 100 shows right around the country. More recently he has hosted the smash hit comedy stand up production 'Show Us Your Roots. His most recent shows were 'Hollywood Kebabs' and 'Live and Circumcised'.

Having performed stand up comedy for over a decade Tahir finally released his first DVD 'Tahir Live' and he has also hosted the successful 'Best of the Footy Show Comedians Volume 2' DVD. Tahir is in constant demand and is a proven performer.

The little known fact that Tahir was a Drama School teacher also has enhanced his expertise as a corporate performer - he won't have everyone turning themselves into trees but expertly tailors material whilst ensuring his engaging style suits all situations.

Tahir is a creative force and has been at the helm of over a dozen major successful stage productions in this country. In each instance he has been the star, main writer as well as the director of the live stage production.

He is also the co­creator of the hit new Ch9 comedy show “Here Come The Habibs” after initially coming up with the concept. He was the story consultant and the show was well received and achieved huge rating before being commissioned again for another series.

Tahir is a prolific performer with a reputation for adapting to any audience and environment. He has the ability to tailor his material to any company, corporate event or situation. He is a proven dynamic performer over many years. 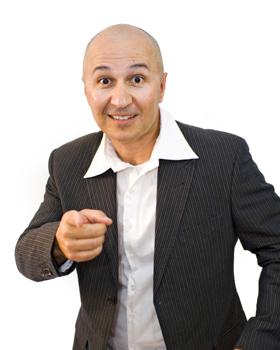