She watched The Big Gig from far too young an age and her first stand up spot for a school concert saw her demoralise the tuckshop ladies. She started a radio station at her high school and was often encouraged to take her English essay and debate topics more seriously. Frankly, if Terri Psiakis hadn’t gone on to pursue a career in comedy writing, broadcasting and performance, psychologists probably would have had something to say about her obsessive behaviour.

Terri started out as a stand up performer and has appeared on Rove, The Glass House, Spicks & Specks, and ABC TV’s Stand Up! Her natural, conversational style also came in handy on The Comedy Channel when she hosted backstage interviews for their homegrown show Stand Up! Australia.

Terri’s first full-length solo stand up show Terri Psiakis is Available debuted in 2005 and played a sold-out season as part of the Melbourne International Comedy Festival to universally rave reviews. It then went on to play in the Adelaide Fringe Festival in 2006.  Terri followed this up with another solo show in 2007, aptly titled Terri Psiakis is Unavailable which saw her exploring the ups and downs of shacking up with a bloke in the suburbs. The trilogy was then completed in 2008 with Terri Psiakis has Pending Nuptials which was quite self explanatory!

Terri will also be familiar to listeners of national youth broadcaster Triple J, where she was a regular presenter for over 5 years. She began with a weekly spot on Wil Anderson & Adam Spencer’s Breakfast Show, co-hosted Summer Lunchtimes with Ross Noble for two years, filled various summer shifts as “The T & A Show” with Amy Blackmur and presented her own weekly segments, “The Psiakis Files” and “Finishing School”, on Robbie Buck’s Drive Show.  Mind you, this was all during daylight hours – she also spent four years broadcasting a weekly mid-dawn shift. That’s a lot of talking to interstate truck drivers.

Terri’s flair for broadcasting continued after she left Triple J and she now hosts her own Weekend Breakfast Show on Triple M: Toast, with Justin Hamilton and Charlie Pickering, from 7-9am Saturdays and Sundays in Melbourne, Sydney and Brisbane.

Terri is also an accomplished writer, both for television and in print. A ‘work experience’ writing job offered to her by Rove has been a permanent gig for the last eight years now.  Her freelance writing work is also extensive and includes pieces commissioned by The Sunday Age, The Herald Sun, FHM, Wine Selector Magzine and ABC Unleashed. Terri now writes a column for Melbourne City Weekly and her first book, Tying The Knot Without Doing Your Block, was released by Random House Australia on July 1st 2009.

Yes, we are very proud.

‘…Psiakis genuinely engages with the room….she offers a lucid and spotless hour of wit and lopsided wisdom' Helen Razer, The Age 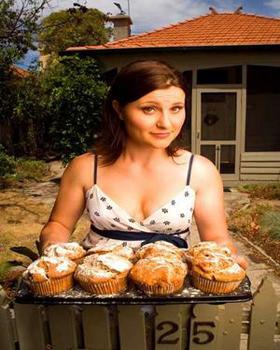