Hope & Gloria aka Nai Bowen & Boo Dwyer met aged 18 and have drunk wine together ever since. Both professionally trained in London they share a sense for the perverse and the dark side of comedy and music.

Titty Bar Ha! Ha! brings together two very English roses (thorns included) for an hour of dark humour. With choreography and direction from Lili La Scala, original music from Kirsty Newton (Comedy Store London; Rich Halls Hoe Down)  this is set to be a cabaret that is sexy and silly,dirty and flirty
Although written as a show in itself, the songs are strong enough to stand alone and can be split up to be performed as club sets and at other late night shows. Hope & Gloria are also excellent hosts!
Sold out seasons at both Adelaide Fringe and Edinburgh Fringe 2013 are a testament to the popularity of this outrageous show!
Probably the most fun I’ve ever had. ★★★★★ BroadwayBaby
Definitely worth seeing. ★★★★  Advertiser
Rowdy, raunchy, and positively ridiculous. ★★★★1/2 Adelaide Theatre Guide 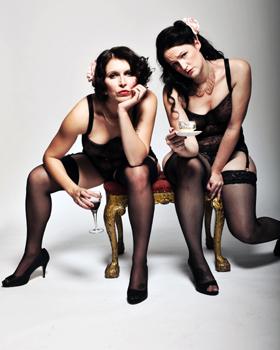