Tom Ballard is a comedian who gets to perform the ancient art of stand-up all around Australia and who also gets to talk on the radio on a regular basis.
He began performing in the Melbourne International Comedy Festival’s Class Clownscompetition when he was in high school but he never won it which has left him with an overwhelming sense of inadequacy and bitterness and he’d rather we all just moved on.
He was a national finalist in RAW Comedy 2006 and based on that performance (which featured a joke about his small penis), he was approached by the hip and funky managers at national youth radio network triplej. They offered him some airtime and he’s since signed some contracts and now they can’t take that back.
In 2008 Tom was selected to perform in the MICF’s Comedy Zone, a showcase of up-and-coming comedic talent. In 2009, along with his silly friend Alex Dyson, Tom took over the triple j Weekend Breakfast shift, as well as performing his debut solo stand-up show, Tom Ballard Is What He Is. The show was nominated for a Golden Gibbo Award (an award that recognises shows which “buck trends and pursue the artist’s ideas more strongly than [they] pursue any commercial lure”) and saw Tom become the youngest person ever to win the prestigious Melbourne Airport Best Newcomer Award.
Since then, Tom’s performed at the invite-only Montreal Just For Laughs Comedy Festival, at the Edinburgh Festival Fringeand at comedy festivals, fringe festivals, theatres and comedy clubs all over Australia.
2010 saw Tom and Alex take over the weekday triple j breakfast show, following in the footsteps of the likes of Wil Anderson, Adam Spencer, Helen Razer, Mikey Robbins, Marieke Hardyand Paul McDermott.  After four years of 'Breakfast with Tom and Alex’ (and winning an ARIA), Tom decided to hang up his headphones for a well-earned sleep in and to focus on his first love, stand up.
You may have seen Tom wearing make-up and telling jokes on Good News Week, Spicks’n’Specks, Adam Hills In Gordon Street Tonight, Can of Worms, This Week Live, The Circle, triple jtv, ABC’sThe Drumor as co-host of ABC TV’s broadcast of the 2011 RAW Comedy Finalwith the mega-awesome Hannah Gadsby. He also appeared throughout 2011 and 2012 as The Project’s Resident Expert fortnightly where he pretended to get angry and know things about issues.
In 2011, Tom released a DVD of his Is What He Isshow and a half-hour special from that taping screened on ABC2 as part of The Warehouse Comedy Festival.
In his spare time, Tom suffers from eczema and has fluctuating weight issues and in the spring of 2010, he contracted scabies.
“consistently, acutely hilarious” Herald Sun
“[Ballard’s] material, most importantly, absolutely kills…It’s tightly paced, it’s perfectly delivered and it’s funny as hell… ★★★★★”  Time Out Sydney
“consistently, acutely hilarious… ★★★★”  Herald Sun 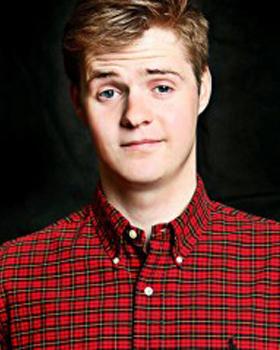