$10.00 entry on the night - Bookings essential. Call 07 3369 4466 to secure your seats. All money to be donated to The Australian Institute for Suicide Research and Prevention

Treat yourself to a great night of laughs and help others in the process, it’s a feel-good WIN WIN!!

Mark McConville from ‘Living with Laughter’ and Fedele Crisci from ‘The Sit Down Comedy Club’ once again join forces to proudly present their annual Suicide Prevention Comedy Fundraiser. (Previously know as the Sharing Of Laughter Day Event)

To mark the 6th year of this event we are very excited to announce our two featured comedians for the night are Steven J Whitely and Kat Davidson. Both of whom are very kindly donating their services for the evening as their way of showing support in the fight against suicide.

HISTORY BEHIND THE EVENT
In 2014 comedian Mark McConville created the “Sharing Of Laughter Day” initiative, an event to be held on or around the 10th of September each year to coincide with ‘World Suicide Prevention Day.

In 2017 we announced an ongoing commitment to help raise funds for The Australian Institute for Suicide Research and Prevention (AISRAP) which is based at Griffith University.

Funds raised from events like this will go directly to helping AISRAP deliver suicide prevention training. The current project we are raising funds for involves sending trainers out to Charleville to deliver the STARS (Screening Tool for Assessing Risk of Suicide) program to rural mental health workers and community leaders.

ACKNOWLEDGEMENTS
We would like to acknowledge Fedele Crisci from The Sit Down Comedy Club for once again kindly donating the venue, advertising and ticketing for the sixth consecutive year, and also The Paddington Tavern for supplying staff for the night. 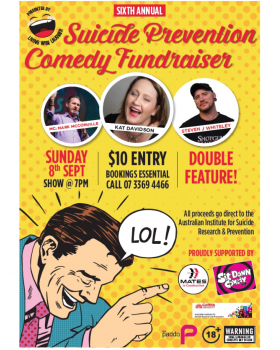