“Come out to Brisbane, we’ll tell a few stories, have a few laughs…”

For many of us, when we faced with a nasty predicament, the flight-or-fight response kicks in. Not so for Andy Thompson. He can’t fight his way out of a wet paper bag and he also has gout which rules out sprinting for safety. Instead, Andy prefers to weave a web of lies and deception to avoid confrontation. In some cases, he has even resorted to break dancing.

Andy is no stranger to letting words tumble freely from his mouth and Lie Hard is a collection of yarns told by one of Brisbane’s favourite story tellers. After a sold out run at the 2018 Sit Down Fringe and 2017 and 2018 Bris Funny Fests and a sneaky appearance as part of the Live and Local Showcase at the 2018 Brisbane Comedy Festival, Andy is returning to the stage with a new solo show about why we lie, the ramifications of making your own boomerang and why his dream of owning an alpaca farm on the outskirts of Buenos Aires will never be fulfilled. 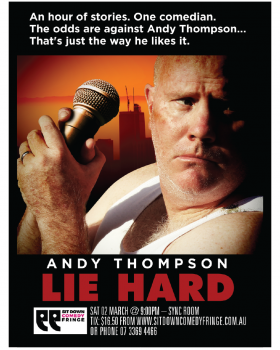