Back From Beyond Blue Yonder @ The Sit Down Comedy Club

Back From Beyond Blue Yonder

Star comics performing at Sit Down Comedy Club raising spirits and funds for beyondblue!
Roll About Comedy and the Sit Down Comedy Club have combined forces to reprise our tour show “Wander Beyond Blue Yonder” which recently toured 8 towns in rural Qld and NSW to rave reviews.
The “Back from Beyond Blue Yonder” show is a reunion show of the same talent that had sides splitting across two states just a couple of months ago! Once again the gang will be back together to raise spirits and funds for beyondblue.
The show is a 2 hour extravaganza of incredibly talented comedians who are making a stand against anxiety, depression and suicide armed only with their razor sharp wit, laughter and happiness!
Bringing together some of Queensland’s finest comics including veteran Lindsay Webb, with nearly 2 decades of comedy experience. Lindsay has performed live and on TV and radio around the world including the biggest comedy festivals in the world, always to rave reviews. He is also a former Guinness World Record holder for the longest Stand Up comedy gig of over 38 hours.
Also Matt Ford and Stephanie Tisdell (Both of the famous Aboriginal All Stars Comedy team) will be on the line up, as well as fresh faced Toowoomba comic Nick Carr, and Master of Ceremonies TJ McKay.
As comedians we are excited to be giving back to the community, and to be supporting such a great cause as beyondblue and all the good that they do in Aussie communities.
We are also very excited to be bringing our successful show to the city, and sharing the same fun and laughter we spread around the bush. 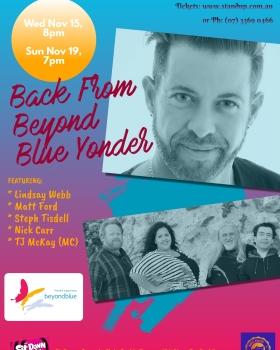