Harley Breen: Not Quite Right @ The Sit Down Comedy Club

HARLEY BREEN
NOT QUITE RIGHT

THE SELL-OUT ARTIST OF THE SYDNEY COMEDY FESTIVAL RETURNS WITH A NEW SHOW!

Award-winning comedian and Logie-nominated Harley Breen is on the road doing what he does best. He's technically normal. But he's also definitely not quite right…

"Breen’s confident delivery and obvious delight in his work are infectious." **** The Age

"Honest, refreshing and delivered with gusto. Breen charms the audience with his quick wit and snappy material." The Herald Sun 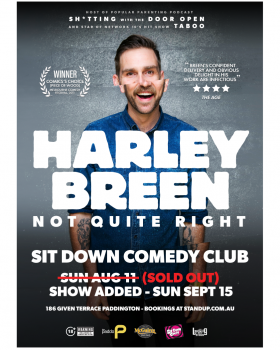