$49.90 includes booking fees(*Groupon not Valid for this Special Event)

US comedian, actor and NY Times bestselling author JOSH WOLF has become one of the most sought after personalities in comedy. After winning over audiences across the globe, it’s Australia’s turn to laugh into the aisles when he performs in Brisbane, Sydney and Melbourne this May.

The popular comedian performs Sunday, May 19 at Brisbane’s Sit Down Comedy Club, Monday, May 20 and Tuesday, May 21 at Sydney’s Comedy Store as part of Sydney Comedy Festival, and Wednesday, May 22 at Melbourne’s Comics Lounge.

Regularly appearing on “Last Comic Standing”, “My Name Is Earl”, “Shark Week”, “Chelsea Lately” and his own “The Josh Wolf Show” on CMT, Wolf proves time and again he is one of the most dynamic and multi-faceted comedians in the entertainment business. Funny and brutally honest, his live show covers everything involved with bringing up three teenagers and dating single mums. 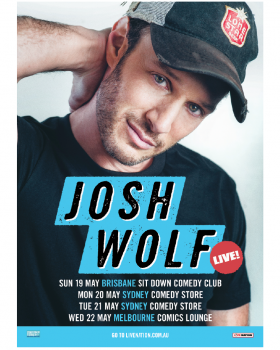