Is exactly what it says on the tin.

Lindsay & Jarred are both International Headline acts. Touring the globe and making laughs for over five decades combined.

Both have garnered huge accolades at Festivals around the world. Both are award winning acts.

Lindsay has a Comedy Guinness World Record & Jarred is hot off the rollercoaster of the American TV show “Bring the Funny.”

They have teamed up many times around the globe most recently touring America late 2019 performing in LA & Las Vegas.

Now they are teaming up in Lindsay’s home town Brisbane.

Late night Larrikins is a late night fun time extravaganza not to be missed.  Less PC and more Pee Ya Pants. 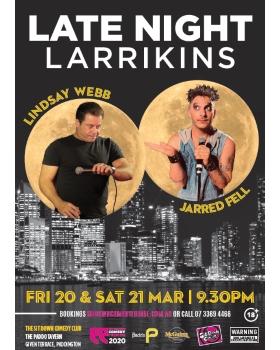