Go boldly where brave comedy legends have hiked before – the ultimate comedy cliff face: RAW Comedy.
Comedy’s next big things will conquer their fears, battle foes with their funniest five minutes, and leave the competition in the dust on the way to the top of their comedy Everest.
RAW Comedy, a Melbourne International Comedy Festival initiative, has been launching the careers of countless comedians since 1996. Chris Lilley, Josh Thomas, Hannah Gadsby, Peter Helliar, Claire Hooper, Ronny Chieng, Tim Minchin have all conquered the mountain.
What about you?
A group of valiant comedy experts are set to scour the country in a bid to lure out humourists hiding in the offices, workplaces, classrooms, pubs and homes throughout our neighbourhoods.
Competition heats will be held across the nation from January. Expect a  RAWcous battle of wit and skilful tussle of tongue as  courageous comics brave the stage in hope of making it to the  2014 RAW Comedy  Final at the Melbourne International Comedy Festival in April. The ultimate winner there receives the opportunity to compete in So You Think You’re Funny? at the 2014 Edinburgh Festival Fringe in August. The 2013 RAW Comedy winner – Demi Lardner – proved to be the Sir Edmund Hillary of open mic competitions when she was also crowned co--‐winner of So You Think You’re Funny?
Anyone who has earned less than $500 from performing comedy is eligible to show off their comic prowess on the RAW stage. Five minutes of new, original comedy material is all it takes --‐ stand-- up, sketch, double and triple acts, musical comedy, are all welcome.
For those not ready and willing to get on the stage, come to the heats and hope to be one of the first to spot Australia’s next Tim Minchin, Josh Thomas or Hannah Gadsby.  Venues and dates can also be found on the website. 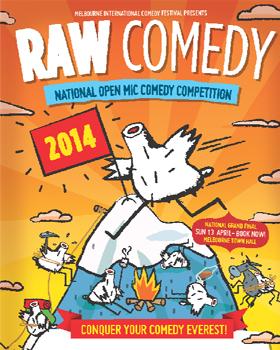