RYAN from MAFS @ The Sit Down Comedy Club

A Tradie asks a gorgeous girl in a Sydney bar for her number. She politely says she has a boyfriend, but, she’s a Producer for Married At First Sight.
Now he’s the star of one of the highest-rating shows in Australian (and New Zealand) TV history. Rollercoaster ride though it was, Ryan, wouldn’t change a thing.
Following his stand-up comedy debut last month - “I was sh*tting myself but luckily, somehow, after lots of preparation, it became the greatest night of my life” Ryan says -  Ryan Gallagher brings his extraordinary story (of life before, during and after MAFS) to stages across the nation (and beyond: the show is huge in New Zealand too).
Expect big laughs, sensational secrets, and hard-fought insights on how to handle occasionally feeling alone. Everybody, on the count of 3.... ‘Awww’.
‘The sold out crowd roared into fits of laughter for Ryan’s debut’ - Daily Mail
Featuring Stand-Up, Audience Q & A, Upfront & Honest Live Interview (arguments about his weird Spotify & Netflix favourites!), Tinder, Insta & Snapchat horror stories, plus a Selfie Meet & Greet session, this show will entertain all. 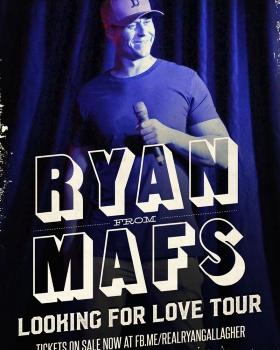