SAMMY J IN HERO COMPLEX
WINNER – BEST COMEDY 2017 ADELAIDE FRINGE WEEK ONE
WINNER – BEST COMEDY 2016 MELBOURNE FRINGE
NOMINEE – BARRY AWARD FOR BEST COMEDY 2017 MELBOURNE COMEDY FESTIVAL
NOMINEE – BEST COMEDY 2017 ADELAIDE FRINGE (OVERALL)
Adelaide and Melbourne has come out in droves to the hilarious coming-of-age story about a schoolboy and his gardner, and a friendship based on their love of comic book hero, The Phantom. Jam packed with real life photos and video, new songs, Sammy J has taken his audience on an unbelievably true journey across the last 20 years of his life to an incredible, must be seen to be believed finale.
With nine x 5 stars reviews and a BEST COMEDY award win or nomination in every festival in which it’s performed, Hero Complex is a bona fide hit!
‘Hero Complex is, quite simply, comic genius’ ????? The Advertiser
In 1996, Sammy J borrowed some Phantom comics from his school gardener. He wasn’t to know it at the time, but that moment set off a chain of events that led to the birth of his daughter, saw him committing a crime in Canberra and ended with a federal policeman searching his attic. It’s an unbelievably true story from the star of ABC’s Playground Politics.
Sammy J is an award-winning comedian, musician and writer. He has performed at the Edinburgh Fringe and Montreal Just for Laughs festivals, been nominated for three ARIA awards, and provides the human half of the Barry Award winning man/puppet comedy duo Sammy J & Randy. Directed by Chris McDonald
‘Intriguing, touching, and hilarious’ Beat Magazine
‘Stand-up, music, storytelling, lighthearted and heartfelt … Sammy J has something for everyone in his show.’ Chortle UK
‘Sammy J is one of Australia’s most talented comedians, with his intelligent humour, musicianship and impeccable timing eliciting fits of laughter.’ InDaily

‘An absolute winner’ The Clothesline
‘He never disappoints.’ Weekend Notes 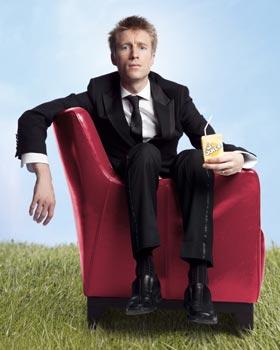