Some of the country’s most loved comedic geniuses have been rounded up for a not to be missed night of non-stop laughs and side splitting humour at the Majestic Cinemas & Event Centre Nambour!
With a lineup of some of the best comedy acts in Australia, see the hilariously funny Lindsay Webb, Anne Howe, Ashwin Segkar, Damien Power, Desh & Fiona McGary live on stage on Saturday October 28!
Hosted by Lindsay Webb
2017 has already been a cracking year for Lindsay and he’s showing no signs of slowing down! As well as featuring regularly at the Sit Down Comedy Club, Lindsay has smashed both the Perth & Adelaide Fringe Festivals, continually released episodes of his hit podcast, “What’s Your Name What Do You Do?”, featured on numerous other podcasts including Wil Anderson’s FOFOP and still had time to launch and tour his new show “World’s Greatest Exaggerator”! Whew! Lindsay is officially the everywhere man of the Oz comedy scene!
Anne Howe
Anne’s rude, crass, bawdy humour has audiences weeping as they either adore or abhor her brand of humour. Anne has travelled extensively around Australia entertaining, bringing the funnies and sharing with audiences her stories of 21st century beauty therapy and her struggle to find love. She loves nothing more than holding court and enthralling people with her somewhat visual descriptions of life and situations.
“One of the best support acts we have ever had on.” Puppetry of the Penis
Ashwin Segkar
Ashwin started his comedy career as a writer, producing comedy cartoon, Boymongoose, which has reached over 10 million views online and has been featured on TV and radio internationally.
Having been born in India, but dragged through a childhood covering New Zealand, Malaysia, England and Australia, his comedy touches on cultural issues with an often-absurd take.
Damien Power
Three-time Barry nominee Damien Power is widely regarded as the most exhilarating voice on the Australian comedy circuit. After just a handful of years playing festivals, he’s racked up a number of awards, nominations and rave reviews, as well as selling out rooms across the country.
Damien toured his raw, assured I Can’t Believe I Cared to audiences around Australia and the world in 2015. He took the 2016 festival scene by storm with Sell Mum Into Slavery, and was filmed as part of ABC-TV’s Next Gen television series.
Damien is also a member of the “True Australian Patriots” – winners of the Director’s Choice award at the 2016 Melbourne International Comedy Festival. He stars in fellow True Australian Patriot performer Anne Edmonds’ new show for ABC iView, The Edge Of The Bush, had his own segment – “Power to the People” – on The Project and featured in the ABC series Fancy Boy.
The 2017 Melbourne Comedy Festival saw Damien nominated for the Barry award for Best Show for the third time in as many years for his smash hit Utopia: Live in 3D show, and won the Pinder Prize, a grant named in honour of legendary comedy impresario John Pinder.
Desh
A seasoned and spiced stand-up comedian, Desh delivers a laconic rendition of satirical observations and hilarious left field opinions; often stepping through a psychological network of human frailties and emotions and poking them with a large pointy stick. Sacred cows never tasted so good – even vegans come back for a second serve.
South African born, Queensland raised and of Indian decent, Desh brings together his unique experiences for his award-winning stand up comedy shows. Desh has become a fixture on the Sydney and Brisbane comedy circuit and has developed a variety of skills as a stand up comedian, writer and actor. Desh satirises the experiences and myths that continue to shape and influence his world: Globalisation, Rugby League, Multiculturalism, Cricket, The Environment, Urban Design, Pornography, Love, Relationships, Funk Music and Eating.
Fiona McGary
Fiona’s comedy will put you at ease, loosen you up, draw you expectantly close and then throw you back in your seat with laughter! Her exceptionally original approach to comedy gigs leaves her audience sore from laughing while feeling motivated and inspired.
She has been performing standup comedy for over ten years, both throughout Australia and overseas; and her performances have featured in The Melbourne International Comedy Festival, Adelaide Fringe Festival, Woodford Folk Festival and The Sydney Comedy Festival. She has performed in almost every comedy venue in the country alongside comedy legends such as Jimeoin, Adam Hills, Arj Barker, Judith Lucy, Wil Anderson and Dave Hughes. 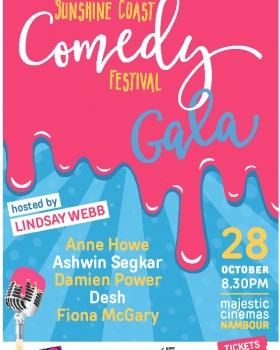