featuring Mandy Nolan and Ellen Briggs
In demand on the comedy circuit and adored for their ability to find the humour in everyday experiences, Mandy Nolan and Ellen Briggs believe it's their regionality that gives them strength in country audiences.
'We both live in Mullumbimby  in Northern NSW - our life experiences seem to parallel the audiences that we talk to - we're not young inner city groovers. We're 40 something mothers of teenagers, we're wives, and ex wives! Ellen can wrangle a snake and operate a ride on mower in the afternoon, and by evening she dons heels and a frock and then she's MCing a charity ball. We're small town showgirls. And boy do we have fun on stage!'
There are few sacred cows that Briggs and Nolan shy away from milking, pushing the bucket of popular opinion under the teats and then the jokes start flowing!
With seven children between them, parenting and their own reoccurring instances that they call 'failure to parent' are certainly the focus of some of their material, but then so is the beauty industry, getting older, getting fatter, strange surgeries, weird TV shows, obsessions, frustrations, and at the end of the day, who unpacks the flipping dishwasher.
The two friends have teamed up to bring two hours of stand up to communities they believe would love a dose of Women Like Us.
'We're not rarefied trophy wives' says Nolan. 'We are the kind of women who know how to put up our own shelves! We just don’t dust them.’ 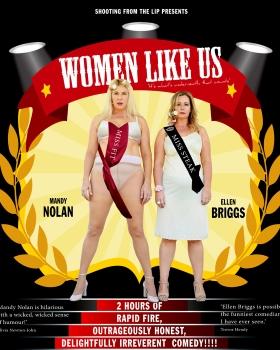